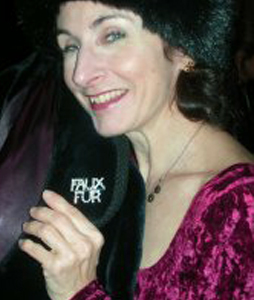 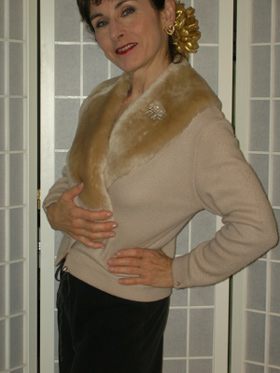 Let's be kind to animals!
(Stephanie pictured with some favorite FAUX FUR accessories)

the main website regarding the musical career of STEPHANIE BENNETT
can be found at
www.harpworld.com

Harpworld® and the Harpworld logo are registered trademarks of Stephanie Bennett/Harpworld Music Co.  So there.

Q. Which Stephanie Bennett is which?

Some OTHER Stephanie Bennetts who are *NOT* the same person include:

A museum curator in the UK. A Fox news reporter.  Another reporter in Australia.  A New York film and video producer. A Houston dog trainer. A Realtor in Chickahominy (say that ten times fast). A photographer/artist who specializes in creating 'dark, disturbing' (creepy, scary) images. A young lady (and I use that term loosely) whose dream is apparently to break into the (ahem, cough cough,) "adult modeling" business.  A 'romance' author.  A certified hula hoop teacher. Someone who was in People magazine in '07 for losing 130 pounds (If I ever lost 130 pounds, I'd be anti-gravity. You'd have to tie rocks to me to keep me from floating away).  A Penn State Master Gardener. Someone involved in some sort of legal brou-ha-ha having to do with adoptions.  A Univ. of Buffalo basketball star (Ha! Basketball?? I'm five-foot-nuthin' in heels).  Not one but two Gospel singers (one in Pennsylvania and one in Florida, who is also a communications professor).  A 'dance music' singer (well, she spells her name Stefanie, but iTunes confuses us anyway.) A pastor in Connecticut.  Another pastor in West Virginia. (Or, is that the same gal, who moved? Dunno.) A spay-and-neuter director in Memphis (my hat's off to her for helping the critters!). A senior banking adviser at a wealth management firm.   The executive director of the Southeast Missouri Family Violence Council.  A poultry science student at the U of Arkansas. An artist in NYC. The Health IT director of the state of Colorado.  A caterer in Rhode Island. A former attorney in Idaho who chucked the legal grind to sell waffles.

Repeat: those Stephanie Bennetts are *NOT* the same person who is pictured on this page.

**************
Do animals have thoughts? Feelings? It's baffling to me that some people actually still doubt it.  The scientific community (for the most part) has been teaching for hundreds of years that everything animals do is 'just instinct'; but everyone who's ever known an animal knows that they have feelings, just as we do; love, fear, likes and dislikes, sadness, pain, loneliness, suffering.  People would just prefer to believe that animals are more different from us than they really are, to rationalize the horrible exploitation and suffering that humans subject them to.  I wrote a song about a true story about gorilla/cat friends and bear/cat friends... (here is a Youtube video about Wildlife Images, where the bear and cat friends lived.)

Here are some Youtube videos of other animal friends (demonstrating that animals have THOUGHTS and FEELINGS above and beyond 'instinct for survival of their own species', which is all that SOME people think they possess.)

Crow plays on rooftop, repeatedly sledding down just for fun

Wolf dog sings to human baby to calm him


Dog pulls an injured dog off the highway

click to help the ANIMAL RESCUE SITE - it's free!